Unlike in India, where innumerable traditions of pada yatra flourish, here in Sri Lanka there remains only one pada yatra tradition (foot pilgrimage to destinations such as Sri Pada died out in 20th century). The traditional pada yatra from Jaffna in the far North to Katharagama in the far South has for centuries been an annual affair attracting not only local pilgrims but also pilgrims from abroad, especially from India.

Seven centuries ago, one of these anonymous pilgrims (for not one diary or record of a pilgrims has ever been published), Arunagiri Nathar, was a great Tamil devotee of god Skanda murugan, who had set out to visit and sing the praise if every great shrine of the god.

Less than a tenth of Arunagiri Nathar’s reputed 16,000 Tiruppukal songs have survived. But from the few that survive, one can surmise that, like s many pilgrims before him, Arunagiri Nathar first visited Kiri Malai on the northern coast of Jaffna peninsula where he sang Tiruppikal, proceeded by foot to Trincomalee where he hang at Tiru Konamalai. 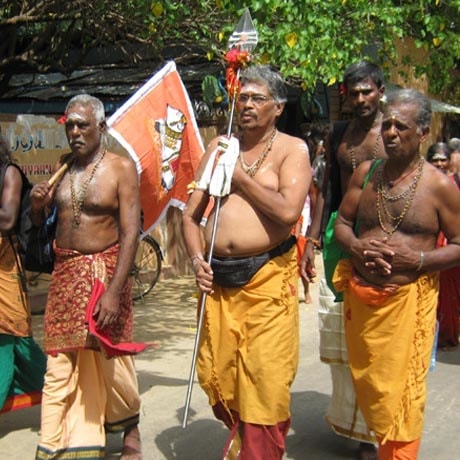 Arunagiri Nathar may have sang Tiruppukal at other shrines as well, but it was only at his destination, Katharagama that he sang the most verse if which 14 still survive.

Arunagiri Nathar therefore was one among the traditipnal pada yatra pilgrims of his day who annually walked for two months from Jaffna via Trincomalee to Katharagama in time for the great Esala (Adi) festival.

While en route to Katharagama, Arunagiri accepted annadanam from common villagers and in return sang his spontaneous verses of Tiruppukal. The subtle spiritual influence (asirvadam) of pada yatris like Arunagiri Nathar, however invisible, should not be discounted or underestimated.

The yatris all carry the God’s belessings with them to a lesser or greater extent, and it is principally ffor this aim that villagers offer annadanam. When one happens perchance (or by God’s grace) to feed a great soul (like Arunagiri Nathar), the blessings continue to manifest for generations afterward.