The Eezhathu Tiruchendur Temple was established by most venerable Swami Omkarananda Saraswati at Navalady Road, Kallady, Batticaloa in 1965. Only after the establishment of this temple, the village surrounded by this temple was named as Tiruchendur. Further Swami had established an ashram near this temple called “Siddhananda Tapovanam”. Through this ashram he had conducted diverse religious activities in order to develop Hinduism in the area as well as throughout Batticaloa District. Only in this temple a sculptural chariot with painting was erected to Lord Muruga in the Batticaloa District.

Swami Omkarananda Saraswati the founder of this temple and ashram entered into his eternal life on 20-11-2004. After this sorrowful event, a constitution (by-law) drafted in terms of the instruc¬tions of Swami for the administration of this temple has been approved at the general meeting and it has been registered in the Hindu Cultural Department. The administrative committee and the general body are appointed in terms of the by-law.

The Tsunami that devastated the coastal area of Sri Lanka on 26 December 2004 also nearly demolished this temple. Since then, we have re-enshrined Lord Muruga in the main hall of the temple that was only partly damaged, and the daily pujas are conducted daily. However cessation of the annual, special festivals and abhisheka poojas and re-construction of this temple have cultivated grievances among the devotees.

Kindly note that this temple does not have any income generating assets like others and no financial assistance have been extended either by the Government or by any other organizations. Daily pooja and other activities are carried out by the small amount of money, offered by the devotees. 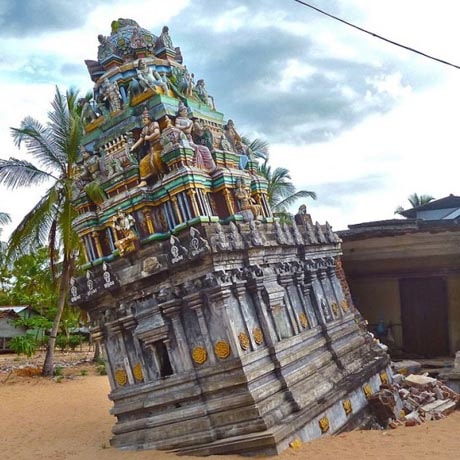 Eezhathu Tiruchendur Temple as it appeared on 5 January 2005. The Temple was nearly destroyed by the Tsunami and must now be rebuilt. Many members of the Temple congregation died or lost family members to the Tsunami.